R vs Matlab is one of the most crucial battles for the students. Because the students are always confused about choosing the best between R and Matlab, both of these languages provide the best data analytics functionality to the users. Apart from that, these languages are widely used by data scientists and statisticians. We all know that the data is growing at a rapid pace like never before.

Therefore the demand for data modeling tools is also increasing. That is why R and Matlab are getting more popular than ever before. Both of these programming languages are also useful in business analytics to drive actionable insights from decision-making data. 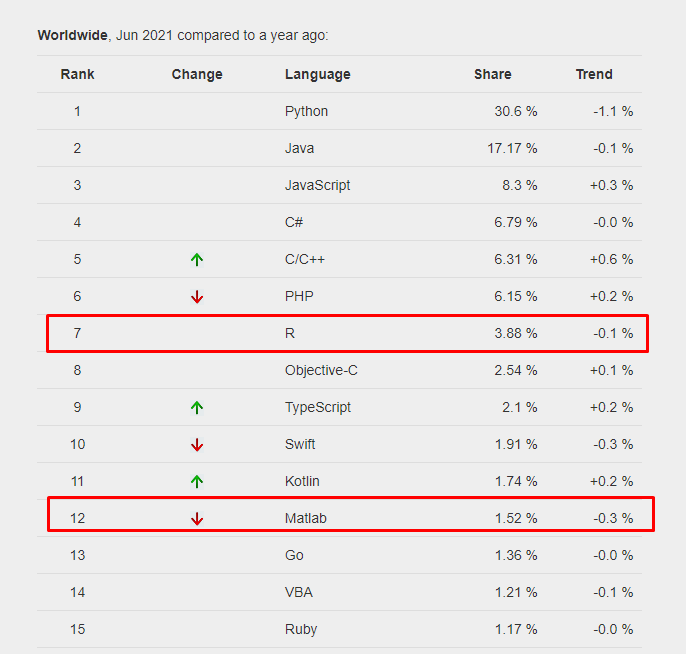 Is R better than Matlab?

As a whole, I can say the R is better than Matlab. Of course, most Matlab lovers would not agree with me because we all know that Matlab is quite powerful. It is more powerful than R in most cases. But if we talk about the industry usage of R programming, then it is quite wider compared with Matlab programming.

Is Matlab faster than R?

Undoubtedly, Matlab is always faster than R. It is quite fast to perform technical computing and statistics. Apart from that, you can also perform faster machine learning features with MATLAB. The reasons being that Matlab library calls are well optimized, and its code is compiled with a Just-in-time compiler.

Is Matlab based on R?

The quick answer is no; Matlab is not based on R. Instead, Matlab is a multi-paradigm programming language. It has one of the best numerical computing environments. It is developed by a company named MathWorks. Therefore there is no link between Matlab and R in terms of platform.

See also  What is Memory Leak In Java And How to Prevent It?

is Matlab easy to learn

No doubt, Matlab is easy to learn. It is even easier to learn than any other programming language. MathWorks provides great support for Matlab. You can find all the documentation for free on their website. Apart from that, there are hundreds of books on Matlab that can easily help you learn Matlab.

MATLAB stands for Matrix Laboratory. It is a high-performance language for technical computation. It has the best integration support for computation, visualization, and programming environments.

Matlab is used for the following purpose. Here is the best answer of what Matlab can do and what Matlab is good for.

R is used for the following tasks

Companies use of R

What companies use MATLAB?

Here is the list of the top 10 companies that are using Matlab in their workplace.

What companies use R Language?

Here is the list of the top 7 companies that are using R in their workplace.

It is widely used for machine learning algorithms, time series analysis, regression, clustering, etc. You can also embed user-generated packages in R programming. You can create the packages for R programming in itself or any other programming languages, i.e., C, C++, Java, and Python. Apart from that can use the command line and the graphical user interface, i.e., IDE’s to code in R programming.

The major purpose of MATLAB programming is to use engineers and scientists for mathematical and technical computing. It is widely used for functional plotting, algorithm implementation, user interface creation, and other programming interactions. Matlab is not like the traditional programming language where you need to code from scratch. In Matlab, you go to the build toolbox that allows you to perform almost every task in Matlab.

See also  Highest Paying Programming Languages in 2021 You Should Learn

You can also extend the functionality of MATLAB by adding more tools to its toolbox. Its toolbox contains some default files, i.e., known as M files. These files are crucial in MATLAB that is used to solve the specific set of problems in MATLAB, such as signal systems, control systems, neural networks, etc. MATLAB is one of the most powerful software for image processing in the world. Matlab has great integration support with lots of tools such as Plotly.js, Octave, Stan, RapidMiner, ggplot2, Dynamo, SketchUp etc.

R vs Matlab in Tabular Form

See also  Swift vs Go | Which One is Better for You?

On the other hand, Matlab is quite easier than R programming. In this programming language, you need not learn the complex syntax and programming structures. It is offering the best simple and easy-to-use syntax. Even a nonprogramming background user can also get familiar with Matlab. MATLAB offers the toolbox to accomplish most of the tasks. Therefore all you need to do is spend your time learning the toolbox that is not as tough as learning R programming from scratch.

R is quite faster than Matlab. But you can only achieve the faster speed from R programming if you have a good command of it.

On the other hand, Matlab offers you a faster speed for technical computation, statistics, and machine learning compared to the normal speed of R programming.

When it comes to supporting, R programming does not offer official after-sales support to the users. But it is an open-source programming language. That is why it has one of the largest communities in the world. You can also find the official documentation of R on its official website.

On the other hand, Matlab offers official after-sales support to its users. It has one of the best customer support globally; apart from that their official site also provides complete documentation to its users. It also offers hundreds of prewritten codes to beginners to get started with MATLAB. Finally, it has more than 500+ dedicated technical support experts worldwide for 24×7 online support.

On the other hand, if you want to use complex algorithms for machine learning, then R is best. Even you can have better control over machine learning using R. It may not be as fast as Matlab for some cases. But yes, it is quite reliable and capable of performing a variety of machine learning tasks.

On the other hand, Matlab is offering 2D and 3D plotting functions. You can customize plots in Matlab either interactively or programmatically based on your skillset. Matlab also offers packages to extend its graphical capabilities, such as Simulink is used for data modeling, simulation, and analysis of multi-domains.

On the other hand, MATLAB is also a platform-independent programming language that can be run on Linux, Mac, and Windows. But you can’t run the same licensed version of MATLAB on more than the specified number of computers. Because it uses the MAC address of the computer to identify the license of MATLAB.